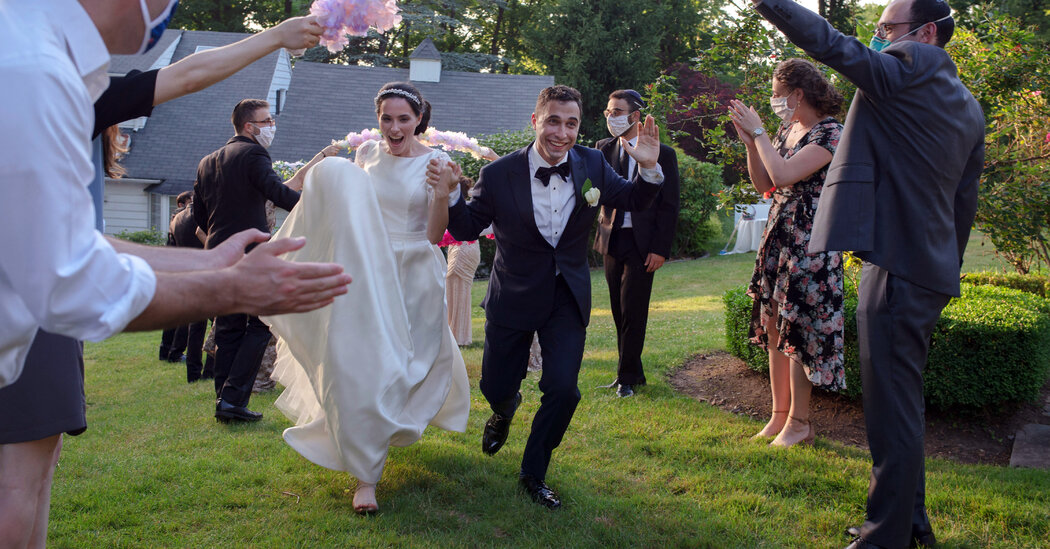 From the start, Ariel Schaap had cause to believe that Joshua Heisler might benefit from a caffeine infusion.

They met in 2010 as pre-med students at Columbia, and among the first things he asked was whether he could borrow her biology lab notes. “Josh basically wanted to do less work,” said Dr. Schaap, an internist at Weill Cornell Medicine in Manhattan. Two years later, when meeting her parents, he fell asleep on their Teaneck, N.J., dining room table.

Dr. Heisler, now an internist, is still fighting exhaustion. Since recovering from the coronavirus in March, he has been on the front lines of the pandemic alongside his colleagues at Montefiore Medical Center in the Bronx. But his decision to marry Dr. Schaap on July 5 was not made in a fog of fatigue. Becoming her husband had been his dream since medical school.

Dr. Schaap, 31, and Dr. Heisler, 30, trace their first meaningful exchange to his emailed request for her lab notes, but they actually met in September 2010 at a Shabbat dinner at Columbia. He was a sophomore, she a junior. “We had similar friends, and we may have seen each other around, but we hadn’t interacted much,” Dr. Heisler said. At the dinner, conversation turned to Dr. Deborah Mowshowitz’s biology class, not an unusual topic among pre-med students. “It’s famously one of the hardest classes at Columbia,” Dr. Schaap mentioned that she had taken the class and saved her work.

Before Dr. Heisler composed the mail hitting her up for that work, he realized he liked the idea of connecting with her regardless of the potential academic benefits. “I was immensely grateful when she sent them, and when I browsed them I saw that she was fastidious,” he said. “But I had also found her attractive and intelligent.”

Dr. Heisler then started looking for Dr. Schaap around Columbia’s Hillel, a Jewish student activities group, before figuring out a way to place himself in her orbit in the spring of 2011. “I heard she was going to Atlantic City for the weekend, and one of my friends was going, too,” he said. “So I said, ‘Oh, I’ll go, that sounds like fun.” But that was a feint. Dr. Heisler doesn’t like gambling, even the low-stakes kind. “I’m too risk-averse,” he said. “I just wanted to spend time with her.”

By the summer, they had a new friendship but not much more. Both were focused on the work they hoped would eventually make them well-rounded doctors.

Drs. Schaap and Heisler both spent their earliest years in New York, Dr. Schaap on Manhattan’s Upper West Side, until she was 8 and her family moved to Teaneck, and Dr. Heisler in the Riverdale section of the Bronx until he was 12 and his parents also decamped to the suburbs. His father, David Heisler, the manager of the kosher catering company Silverleaf Caterers, and mother, Rebecca Heisler, a STEM coordinator at Salanter Akiba Riverdale Academy, still live in New Rochelle, N.Y., where they raised his three younger siblings, Zoe, Chanan and Matthew Heisler. Dr. Schaap’s parents are Chaim and Etti Schaap. Mr. Schaap is a computer consultant, while Ms. Schaap is a psychotherapist with Jewish Families and Children’s Services in Teaneck. Her two older siblings are Talia Hoenig and Noam Schaap.

In the summer of 2011 Dr. Schaap was an intern at Bellevue Hospital, and at the time was considering psychiatric work. Dr. Heisler was riding through the city helping Columbia’s Emergency Medical Service, a volunteer ambulance squad.

“Our relationship was definitely slow going,” Dr. Schaap said. A power outage in the apartment she was sharing with roommates moved things along. “One day she told me she had no air-conditioning and was looking for something to do,” Dr. Heisler said. He invited her to his dorm, a single, to watch a movie. It was the first time they were alone together. Neither can remember the movie, but both remember the other being good company.

“I was like, ‘Oh, I like this person. It would be nice if it works,’” Dr. Schaap said. Toward the end of the summer, it didn’t.

“There was a little bit of a disastrous thing where we went to this Middle Eastern restaurant Ariel liked in the diamond district,” Dr. Heisler said. “I wasn’t talking much.” Dr. Schaap felt she had to hold up more than her end of the conversation. “It weirded her out,” he said, so much so that she pressed pause on spending time with him.

“I think I was just a little anxious,” Dr. Heisler said of his behavior that night. “I liked her and I didn’t want to mess things up.”

That fall, he tried again, asking her out for coffee. Instead of sitting at Starbucks, though, they walked to the steps of Columbia’s Butler Library and talked late into the night. “That was when we knew we had a real connection, that this could be for real,” he said. Dr. Schaap was a senior, Dr. Heisler a junior. By the time she graduated in June 2012, they were a couple and had met each other’s parents.

Dr. Schaap’s first encounter with the Heislers was over ice cream at a Häagen-Dazs shop near campus. Dr. Heisler’s visit was more ambitious: a weekend with the Schaaps in Teaneck. He hadn’t prepared well. Just before he boarded a bus to New Jersey, he had worked a long shift on the emergency medical services van. “I hadn’t slept in 20 hours,” he said. “He fell asleep at the Shabbat dinner table,” Dr. Schaap said. He was embarrassed but redeemed by his work ethic.

After Columbia, Dr. Schaap worked at a Manhattan research lab for a year while Dr. Heisler finished college. Both enrolled in medical school in Fall 2013, she at Rutgers in Newark and he at Hofstra on Long Island. While the distance didn’t make seeing each other impossible, it intensified a growing feeling for Dr. Heisler that they should get married.

Her ambivalence stung. “It’s hard to hear that when you’re like, ‘I’m ready for this,’” he said. Still, both made their relationship a priority after graduating medical school in 2017. During the process of being matched with hospitals as residents, they stressed their commitment to being near each other. He landed at Montefiore, she at Weill Cornell. Dr. Heisler moved to Riverdale to be closer to work. Dr. Schaap managed to rent an apartment in the building she grew up in on the Upper West Side. Each memorized the other’s schedule. They saw each other whenever their shifts allowed.

Medical residencies typically last three years. In late 2019, as both were in their second year, Dr. Schaap started thinking about where her career would eventually take her. “I was like, am I trying to stay in New York?” she said. Her decision, she realized, would have everything to do with Dr. Heisler’s whereabouts.

Suddenly, she said, “it felt like the right moment to propose.” In November 2019, she bought a toy ring online. Then she thought back to the night their romance took flight, over Starbucks.

On Nov. 20, she made a solo trip to the same store, near 110th St., and asked a barista to write “Will you marry me?” on a cup. Later that day, she invited Dr. Heisler to meet her at Columbia.

“I said, ‘We haven’t been there for a long time, remember how beautiful the campus is?’” When he arrived, she told him she wanted coffee. The handoff of the coffee cup with the proposal was successful, but Dr. Heisler didn’t notice the extra writing right away.

Back on the steps of the Butler Library, “I had to be like, ‘Josh, look, did they write something on your cup?’” she said.

“I was totally oblivious,” he said. But his oblivion turned to bliss: “I was really, really happy. It was an enormous weight off my shoulders.”

They planned a July 5 wedding for 300 in New Rochelle, but in April, they knew a big celebration was not to be.

“There was definitely disappointment, but it was put into perspective by everything at the hospital,” Dr. Heisler said. By then, he had contracted the virus from a friend in New Rochelle, the site of an early outbreak, and had recovered, ready to work. “I thought about how miserable it was and how tired I was all the time,” he said. “But I also thought, this is my job. And this is our time to shine.”

Both doctors shined in a different way on their wedding day in the Englewood, N.J., backyard of a family friend. In the heat of a scorching afternoon, 45 family members gathered for a traditional Orthodox Jewish wedding. Dr. Schaap wore a long white dress from Designer Loft in Manhattan with a matching lace mask, Dr. Heisler a navy tuxedo. Under a huppah loaded with fat white hydrangeas and dusty pink roses, they were married by Rabbi Dan Margulies, a former roommate of Dr. Heisler.

As the ceremony progressed, guests shifted their chairs in search of elusive shade; some opened paper parasols. Masks came off. The sun, though, couldn’t wilt the spirits of the Schaap and Heisler families. As Rabbi Margulies gave Dr. Heisler the go-ahead to stomp a glass, signaling the finality of their marriage, whoops of “Mazel Tov!” gave way to arm in arm dancing by parents, siblings and the bride and groom across the sprawling green lawn.

Alfresco After the ceremony, guests helped themselves to iced drinks from beverage stations dotting the yard. Later, they found their way to numbered, skirted tables, where they dined on mango salmon with roasted sweet potatoes; for dessert, chocolate dipped strawberries and chocolate chip cookies were served.

Hula Dance A three-piece band, Blue Melody, played during the wedding and reception. Guests danced in hula hoops to maintain social distance. Though Drs. Schaap and Heisler took ballroom dancing lessons in Manhattan a few years ago, they skipped a first dance. “Our dancing skills have since vanished,” Dr. Schaap said.

Working Together Drs. Heisler and Schaap finished their residencies in June. Dr. Schaap will continue working as chief resident at Weill Cornell. This month, Dr. Heisler started working at Cornell, too. After the wedding, he moved into Dr. Schaap’s Manhattan apartment.